While names like Justin Bieber and Lady Gaga are synonymous with great social media marketing, the true master is no one other than the Fast Five star, Vin Diesel.

Here’s a screen shot from Vin Diesel’s Facebook Page back in May 2009, where he was at a “mere” 3.5 million fans. Back then, the only person bigger than him on Facebook was President Obama. 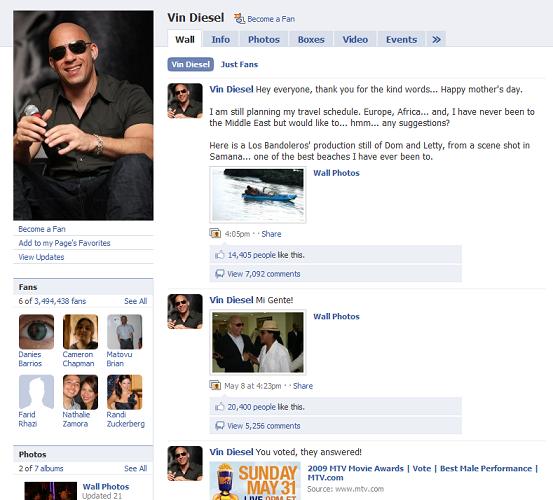 Here’s what you can learn from Vin Diesel about Facebook Page management.

Do It Because You Enjoy It

Every single week we hear about a new social media platform and how it is going to change everything. Again.

In his own words to Maxim:

The only thing that they didn’t talk about in the movie The Social Network was what was driving people to Facebook. And they forgot to mention that they had a guy named Vin Diesel. A guy who didn’t do a lot of press. I was always very, very private. Facebook became an opportunity to connect with fans for the first time. Now we’re in this new world where it is all there on the Internet for you to play with, and you can let people in as much as you want. For me it was very therapeutic. 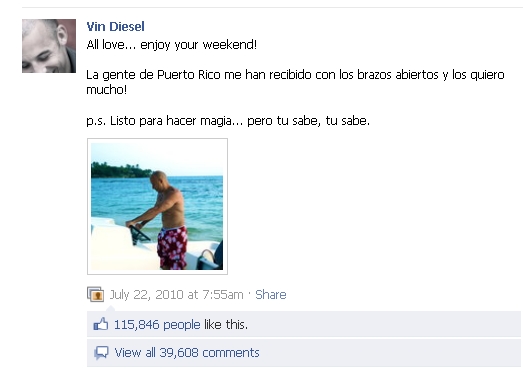 Takeaway: Why would you start a Facebook Page unless you really enjoyed it? If you just run it like a robot, it is going to truly show.

Set a Goal for Yourself

We all know that our Facebook Pages have a goal. But what about a goal for ourselves?

For Vin, it was to stop smoking. He explains how it happened:

Back when I only had, like, 100,000 friends, my girlfriend said if I got more fans than Barack Obama I had to quit smoking. I had six million by January 2010, and it was all because I was communicating with people honestly.

Takeaway: Work a personal goal into your Facebook Page management. Empower this task to improve yourself in a positive way (e.g. lose weight, stop smoking, etc.).

Give People What They Want

For Vin Diesel fans: pics of Vin when he was a kid and when he still had hair on his head.

You should see some great pictures of me as a kid with hair on my page. Get in there. Click on those bitches. Look around.

I didn’t edit the cursing to show that he gives people what they want: an unedited, true communication channel with Vin Diesel. 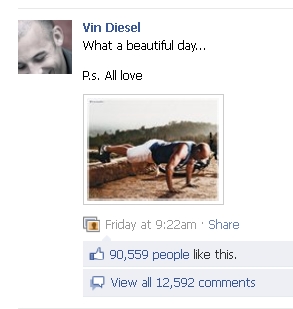 Takeaway: Give people what they want.

Prove that You Listen to Your Followers

How did the Dwayne “The Rock” Johnson became involved with The Fast and The Furious franchise?

He’s a great guy. We’d been talking about doing something together for 10 years. Frankly, his role was designed for Tommy Lee Jones or Josh Brolin. But this actually started when someone posted a note on my fan page saying Dwayne and I should work together. I read that comment to Justin Lin, the Fast Five director, and it just went from there.

Takeaway: When you hear a great idea from your followers, don’t just say that “you’ll look into it”. Make it happen.