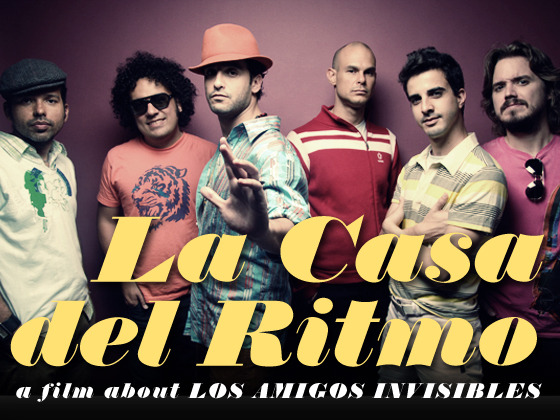 This concert film was the brainchild of Ecuadorian artist/musician Juan Miguel Marin, whose former North-Carolina based Latin-Alternative quintet, La Rúa, toured with Los Amigos Invisibles back in 2005 and 2006. Marin was inspired by the band’s hard work, their devotion
to their music, and commitment to their fans.

In 2010, a chance encounter at the Miami International Airport between Marin (now based in NYC), and LAI bass player Jose Rafael Torres led to a conversation about the band’s 20-year anniversary, which took place in 2011.

Marin immediately thought of friend and Ecuadorian director Javier Andrade as the perfect collaborator to bring the film to life – a film that shared the band’s twenty-year musical journey through intimate conversations with each of the six original members of LAI, and a special concert shot in NYC. With the band’s approval, a 3-person team consisting of Juan Miguel Marin, Javier Andrade, and Catalina Kulczar-Marin began production of “La Casa del Ritmo”
in New York City, in summer of 2010.

In January of 2011, they created a Kickstarter campaign to help raise $30,000 in order to complete the project. Kickstarter is an all-or nothing, crowd funding platform for creative projects. Thanks to nearly 600 backers (now Associate Producers), from countries all over the world (Venezuela, Australia, France, Germany, India, etc), they raised $31,500, exceeding their 30-day goal of $30,000.

Upon funding of the project, La Casa del Ritmo team was ready to execute the original idea of filming a memorable concert sequence in New York City, the band’s second home, and the city that took their career to a global stage. The special night captured in the film took place on March 11th, 2011, at the Highline Ballroom in NYC.

“La Casa del Ritmo, A Film About Los Amigos Invisibles,” was produced by Catalina Kulczar-Marin, directed by Javier Andrade and includes interviews by David Byrne (Talking Heads) and Yale Evelev – both formerly of Luaka Bop – and each of the six members of Los Amigos Invisibles.