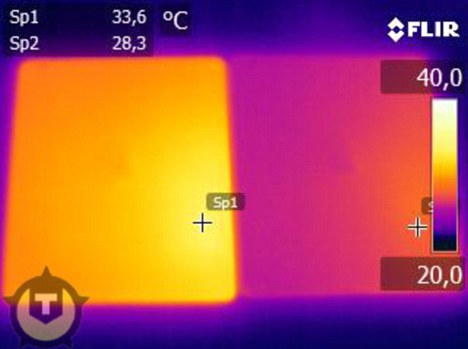 The thermal camera shows the new iPad (left) is considerably warmer than iPad 2 - tallying with user complaints that the new tablet can become 'uncomfortably' warm while in use. (Photo Credit: Dailymail.co.uk)

One disgruntled customer said they were returning theirs after it reached temperatures of 47c (117f) following only ten minutes of use.

Dutch technology website Tweakers said the new iPad, which went on sale last Friday, was 5c hotter than its predecessor when running.

Customers have complained that the gadget is ‘too hot to hold’, particularly when playing games, prompting a spokesman for the U.S. watchdog Consumer Reports to announce it was conducting its own ‘scientific analysis with thermal imaging’.

It found that the product became ‘significantly hotter’ after playing the popular game Infinity Blade II, with temperatures of 47c recorded on the device’s front and back.

According to the iPad battery information available at Apple’s site, 47 degrees Celsius is too hot: 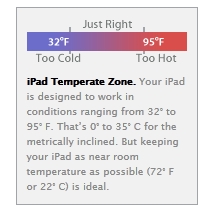 Too hot to handle?