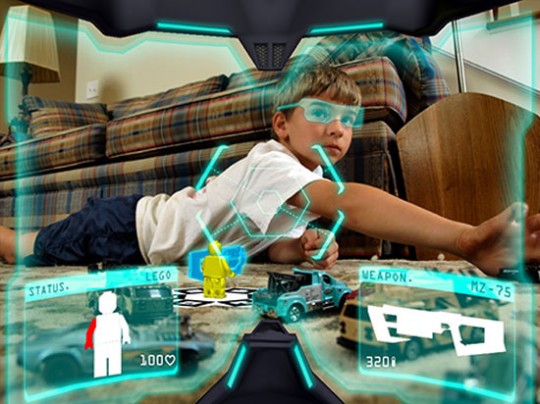 If you are familiar with gaming terminology, ‘augmented reality gaming’ is a phrase you might have heard thrown about in the last few years. Augmented reality takes the real world in real-time and enhances it with computer generated features in the form of sound, imagery and video. Pretty cool, right? Well, one of the main ways that augmented reality can be utilized is through video gaming; you can bet your bottom dollar there will be a market for it! Millions of gamers would pay top end to have a device which successfully merges reality with digital reality; just imagine this:

Question is, is this concept as distant as having a real-life ‘holodeck’ from Star Trek? Perhaps not. This article takes an investigative look into augmented reality gaming; where it came from, where it is now and where it is going.

Augmented reality gaming of the past

The first example of augmented reality gaming was in 2002, coming out of South Australia.

Using Quake as a base, in this video we see the user shoot enemies appearing from a car park (the reality). As you can see, the technology is primitive and very basic; thus augmented reality gaming was shelved until technology would be released to accommodate it…which brings us to the present.

Augmented Reality gaming of the present

A lot of the augmented reality games that we have in our current day are perhaps more gimmicky than ground-breaking; but a step in the right direction nonetheless. Using smartphones, iPads, PS Vitas etc. we are now able to take the world in real time and add an element of augmented reality to gaming.

Of course, none of this is seen through a headset; but through the screen of a PS Vita….making it really a poor man’s augmented reality somewhat. Even though it may be basic, developers are thinking up some interesting titles for augmented reality so far:

However, you think about the technological advances in the last ten years alone…the 3DS compared with the Gameboy colour, the PS3 compared to the PS1? A Nokia 3210 compared with the iPhone 5? These are important steps forward and even though the augmented reality that is commercially available for gaming at the moment is somewhat basic; it’s not going to be long until we have the technology to take another huge step forward.

Augmented Reality gaming of the future

As we look to the future, a company who are gathering a lot of buzz as of late are pioneers Valve who can’t seem to put a foot wrong in the industry. Chet Faliszek, a member of Valve, stated recently that the company was extremely interested in augmented reality and has been developing ‘AR goggles’ in a new hardware lab. Valve understands that the technologies that we have around us are rapidly changing and if companies do not look around them and update in innovative ways – they may be lost by the wayside. At the end of the day, the public want interactivity and synthesis between reality and digital gaming; Valve could be the first ones to supply us with this; in fewer than five years apparently.

In conclusion, if technology keeps developing at the current rate; augmented reality gaming will be a household favourite in less than a decade. The augmented reality games we have at the moment are worthwhile yet basic, but they are proving popular with the market; raising the awareness to developers that ARG is the future. Who knows, maybe one day soon we’ll be able to view the whole world in a different perspective…