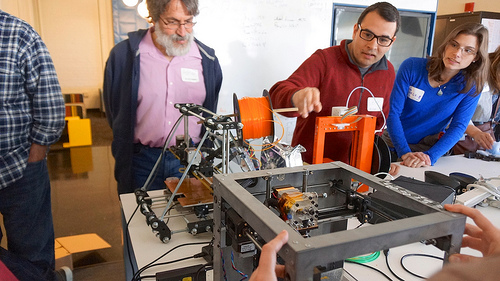 In recent years, we’ve seen plenty of examples that demonstrate how powerful 3D printers have become, but companies haven’t ventured too far into the electronic world.

So far, most objects have been printed using one or two materials, so the thought of crafting your own phone or video game console has felt like a futuristic fantasy.

Now, however, there’s a Kickstarter in progress for a printer called the Voltera V-One, which can make small-scale circuit board in mere hours. It had a $70,000 goal, but raised more than $300,000 with weeks left in the fundraising phase. This just shows how excited engineers and programmers are — they want to get their hands on a machine that allows rapid prototyping from a small office. It’s a noteworthy development in 3D printing technology.

Here’s how it works: the printer’s extruder sets down a thin line of conductive ink, which connects the various circuit components together. Then, it lays down another layer of insulating ink to buffer the conductive area. This is a highly precise process, and as it stands, the printer will be capable of extruding an ink line as little as .2 millimeters wide. Although the mechanisms involved are complicated, the actual printer’s design only features one button and an easy-to-replace ink cartridge system, so in that regard it isn’t that different from other desktop models on the market. There’s only room for one ink type, but if it’s time for the printer to extrude some insulating ink, you just need to switch out the cartridge. This is also called a two-layer circuit board.

The technology still isn’t advanced enough to mass-produce complete circuits — you’ll need to insert various transistors and chips after the initial board design is printed — but it does allow for quick prototyping and small-scale production runs. Until now, this tool was only available for costly research projects and not too easy to come by, so that’s why developers are getting excited. Price is the other factor — according to the manufacturers, the first run of Voltera V-Ones will cost around $1,500, which is truly a bargain for this functionality.

In the future, we will probably see the various 3D printers become integrated into one sophisticated system, where a detailed object with hundreds of unique parts can be created in one fell swoop. We’re still not there yet, but the Voltera is an encouraging sign for the Maker community. It continues to bridge the gap between elite researchers and amateur creative types, putting development power in people’s hands for a reasonable price.

Whether these specialty printers spark another creative revolution remains to be seen, but consumer demand is highly promising so far. Perhaps another piece in the 3D printing puzzle has finally been solved.