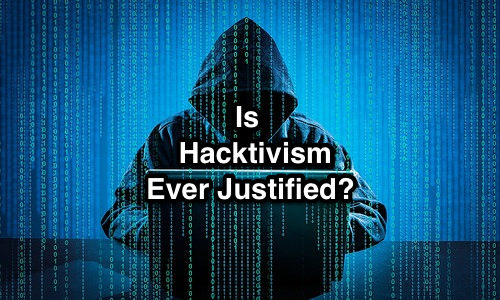 When many people think about protesting, they automatically conjure up images of the 1960s; and for good reason. It was a time a social upheaval that included the civil right movement, women’s movement, anti-Vietnam War movement, LGBT movement, student movement and environmental movement.

Almost six decades later, we are seeing many of the same issues being debated. But with that change in time comes new ways of protesting. Social media, for example, has given a soap box to anyone who wants it, and cyber activism (sometimes referred to as ‘slacktivism’) has made it easier to share the messaging, sign petitions and garner global attention.

While these techniques are readily employed by law-abiding members of society, there is another form of protest that seems to walk the line between the ethical and the criminal, known as ‘hacktivism.’

Hacktivism is a portmanteau of hacking and activism and utilizes many of the same online attacks as low-level cybercriminals. Still, it would be foolish to take the threat of hacktivism lightly as it has had real effects on the private and public sector. Here are just a few examples:

As you can tell, hacktivism can cause some real problems for the private and public sector. To mitigate these threats, many organizations invest in a cybersecurity policy to insulate themselves against the costly damages of an attack.

Is Hacktivism Ever Justified?

But that’s not what hacktivists do. Virtual vigilantes have also spied on criminals, leaked corporate secrets, vandalized social media pages, redirected URLs and taken their protests into the real world.

Each of these tasks are surprisingly easy. For example, a group of hackers may want to stymie traffic to a website by flooding it with fake web requests until the service crashes for a period. Hacktivists sometime refer to this as a ‘virtual sit-in’ while most IT professionals call it a distributed denial-of-service (DDoS) attack.

Downloadable tools, tutorials and ‘hackers for hire’ are regularly traded on dark web for activists and crooks alike. And this is where things get interesting. Is a DDoS attack really any different than a union protest outside a supermarket?

Proponents argue that a DDoS attack does nothing to harm a network infrastructure and can be a useful form of protest if limited to a specific time. Opponents say that a DDoS attack is nothing like a sit-in because the traffic sent to a site is not an assembled of angry citizens, but rather a phony army of malware infected computers; also known as a botnet.

The same cloud of uncertainty hangs over social spoofing, pirated media distribution and website tampering. Even if it’s used for a righteous cause, something about it isn’t quite kosher.

On the other hand, it seems unfair to include quasi-criminal hacking under the same umbrella term as those who use their digital expertise to protect free speech, human rights and freedom of information using legitimate technologies. For example, a virtual private network can overcome location-based censorship.

In the end, this subject will likely be debated for years to come, especially as new technologies enter the market. Protesting won’t disappear, but it is sure to evolve in unexpected ways.