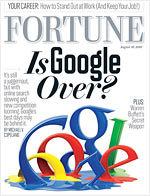 [This is a guest post by Zachary Zawarski, a Google Apps Consultant, in response to Fortune Magazine’s article Google: The search party is over.]

The author, Michael Copeland, makes several valid points in his article, which was primarily written to explain why Google’s stock has significantly trailed the Nasdaq and Apple.  Although Google’s stock has been an underperformer, I strongly believe that the market has gotten this one wrong and that Google’s stock has its best days ahead of it.  The topic of Google’s business model is something that is near and dear to my heart since I am both a Google shareholder and I started a business on the premise that Google Apps was going to be an extraordinary success.

Copeland states that investors are nervous as to where Google’s revenue growth will come from.  Google is no longer a growth stock, which means it’s soaring stock price, which was firmly in place from the market lows of March 2009 through December 2009 will no longer be the norm.  Google is still growing its revenue at 15-20%, which any shareholder of CEO would be extremely happy with, but this is Google — they’re supposed to be better than great — they’re supposed to be the best.  Once Microsoft grew into a mature company, its stock has been fairly flat for the last decade after experiencing outstanding growth in the 1990’s and many feel that Google’s stock will fall into this trap.

What are Google’s problems you ask?

The fact that 90% of their revenue is still based on the AdWords and AdSense business model and the web is becoming increasingly social, which Google has not been a player in.  However, Copeland’s argument that Google is on the decline is premised on the idea that the significance of search in our daily lives will decline while search loses market share to Facebook.

Has Google missed out entirely on the trend in social media? Absolutely. Google Buzz was a complete failure and there’s a slim chance that Google even has a shot at competing with Facebook with the rumored Google Me. Does that make their company less relevant than they were five years ago? I don’t think so. Social media is not going to make search irrelevant as Copeland alludes to in his article.  Facebook is not the DVD to Google’s VHS so to speak. There is always going to be place for search along with social media.

Mike McCue, an early pioneer of Netscape and founder of tablet software company Flipboard, states that social media is replacing the need for search. Although we receive a lot of our content from friend suggestions, I don’t believe social media will be the end of search. Search gives you the ability to get instantaneous information based on what you want, not based on what a friend shares with you.  Although more people are turning to social media, the notion that this will somehow be the end of search is an outlandish thought.

That brings us to the topic of appeal to advertisers.

As a website developer, I use both Google and Facebook ads.  The great thing about these platforms is that they serve very different purposes. If I have a website tailored to publishing content for people to merely read, Facebook is the winner here since the visitors I attract on Facebook that like my website’s Facebook page will continually be presented with my articles in their news feed.  On the other hand, if I have am selling a product or service, Google is the clear winner. For example, if I’m a printer who makes business cards, Facebook has very little value since there’s no way to target people looking for business cards.  There’s nobody who fills in “business cards” in their interests or enters their status as “I’m looking for business cards.”  People who want business cards Google it, which make Google to dominant player for businesses seeking advertising exposure.  Although the article states that Google has just a 64% market share in the U.S., I am willing to bet that Google’s market share is closer to 85% — ask any website owner.

Search isn’t close to being dead, it’s just awaiting its next revolution. As this article points out, it’s going to be better search with a wider array of searchable items.  For example, a person searching Australia will be given news, blog articles, Twitter updates, and information on hotels, shopping, and restaurants on a single page in the new era of search.  That’s just something that cannot be provided by Facebook.  With Google’s latest acquisition of Metaweb, search will become smarter and more relevant.

2 thoughts on “Google: The search party is not over”