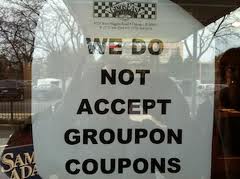 Daily coupon fatigue is settling in.

Throughout 2010, it has been estimated that about 700 companies emerged in the daily deal market and

With Facebook phasing out its daily deal offers, Yelp scaling back its own, and Groupon still working towards an IPO, there are a lot of questions regarding the daily deal industry.

In an interview with AdWeek, Boyan Josic, CEO of Daily Deal Media, stated that the prices for daily-deal keyword search terms have skyrocketed, driving industry-wide acquisition costs from $2 a head to higher than $10. He observes that this has created a jolt to the ecosystem.

2. Rising Dissatisfaction of Merchants with Groupon

eMarketer reported in July 2011, that 82% of merchants that advertised a deal with Groupon, were unhappy with the level of repeat business their Groupon promotion brought in, and nearly as many said Groupon users were more price-sensitive than the average customer.

According to a Rice University study, businesses reported that as of May 2011 just 20.4% of customers who came in because of a Groupon offer became repeat visitors, and that less than half of the businesses were interested in another such promotion.

Still, eMarketer reported that about half of the surveyed businesses would still run another Groupon.

3. Rising Number of Mergers and Acquisitions

AdWeek also reported that CrowdSavings, a deals site with $1.1 million in venture backing, did its seventh acquisition in August 2011, and told AllThingsD that it plans to buy six more competitors by year-end. For example, in October 6, 2011, Hawaii-based daily deal company PlayHawaii.com announced via email to all of its subscribers that it will merge with Crowdsavings.com. In an email statement (the official press release is available here), PlayHawaii Co-founders Jon Sugihara and Andrew Roth announced:

With the additional resources Crowdsavings brings to the table and their network of users, we know they will bring higher frequency of quality deals. More importantly local businesses will continue to grow and market themselves with the support of the Crowdsavings team.

One thought on “3 Trends in the Daily Deal Industry”