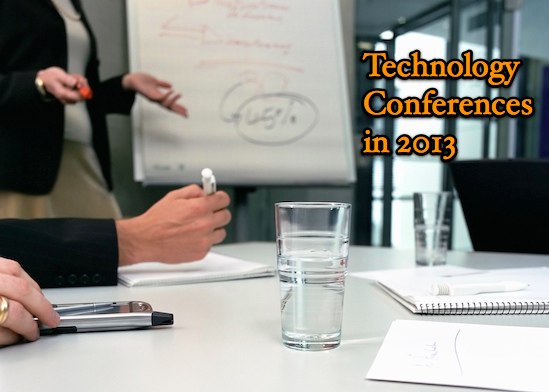 With 2012 serving up the latest and greatest technology, from smartphones to industrial solar arrays, this year is only going to get bigger, better, and more exciting! Whether your interest is in the world of gadgets, or strictly corporate technology, the many upcoming tech conferences give each of us the opportunity to be better at everything that we do for both work and play.

Whether you work in an industry where technology plays a major role, or you simply like keeping up on what the wonders of scientific endeavor have whipped up for us this year, get ready to hit the road all year long with these four technology conferences (and also these four conferences on social media) to create your traveling schedule for 2013:

If you’re a true technology lover, there is no better way to start the new year than by attending the world’s largest showcase of consumer technology. From next-generation gaming consoles to the latest televisions, computers, tablets, smartphones, and much more, CES draws the biggest presenters and manufacturers in the world in order to give you a long, hard look at the future of your living room and office!

When and Where: Take a trip to glamorous Las Vegas, Nevada from January 8-11, 2013 in order to take in the more than 3,000 exhibitors showing off the future of technology at CES 2013.

Aiming to take a broader look at the technology that powers our lives, the Technology Frontiers conference promises to help you to “transform your work, your life, your world,” and the wide-angle view that the event maintains should do exactly that.

Whether you need ideas in planning the future of your business endeavors, or you want to deck your entertainment center out with the latest technology that suits you and your family, this is a can’t-miss event for technology enthusiasts and those in the industry alike!

When and Where: The Park Plaza Hotel in London, England will play host to the 2013 version of the Technology Frontiers event from March 5-6, 2013.

The Next Web will take attendees on a two-day odyssey of learning about what is around the corner as far as standards and ability are concerned, helping everyone to better understand what the web is, how it works, and where it’s going!

When and Where: Visit Amsterdam in Holland from April 25-26, 2013 in order to learn about the latest web technologies and the future of the internet itself at The Next Web 2013.

Beginning with their world-renowned Hackathon – an event that pits coders against one another as they attempt to dazzle and awe with their programming skills – 2013’s iteration of the TechCrunch Disrupt NYC event will offer everything from one-on-one discussions with some of the industry’s brightest minds, guest speakers and panels that aim to enlighten with their insight and experience, and a showcase for new startups to show their stuff and get noticed.

If you can make it to only one deep technology conference this year, the sheer variance offered by TechCrunch Disrupt NYC should give it a boost to the top of your list of possibilities!

When and Where: Visit New York City to attend the TechCrunch Disrupt NYC 2013 conference, being held from May 18-22, 2013. Grab New York Tourist Pass to make the most of your NYC travel experience!