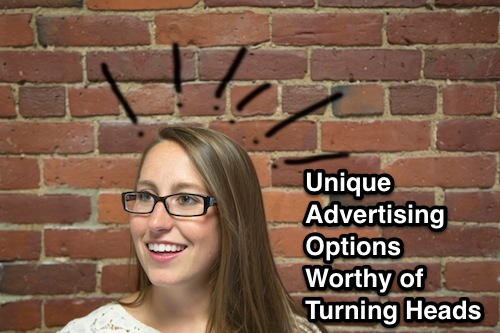 Every day we are exposed to thousands of advertising signals whether it’s during the time we’re watching television, browsing the Web, commuting to work, or even the logos on our apparel.

Advertising is all around us so when we turn the tables and begin exploring the options as a business owner or marketing professional we can use our experiences in being exposed to advertising and use them as a starting point for our own campaigns.

Traditional advertising channels have been immensely saturated to the point that we have developed advertising blindness which is why we see new options becoming available that disrupts how we perceive ads and marketing messages.

The following are a few examples (and potential investments) for worthwhile, unique advertising options:

·  Car wraps and mini billboards – There is an estimated 250+ million cars in the United States so it’s safe to say that we see a lot of them throughout our daily routine. The amount of cars has opened the industry for car wraps which display marketing materials. Alternatively, New York taxi advertising, for example, places ads on top of those small billboard-like areas which get in front of millions of eyes each day. Both options leverage a common sight in our commute and we can’t help but take notice.

·  Buzz agents –Buzz agents look and act like any other person on the street but they’ll have products in hand which they’ll slyly mention which plants the idea of the product in another’s head. Next time that person is out looking for that type of item they will recall a conversation or event where they have seen or heard the product which may influence their decision.

·  Augmented Reality – Phones and other gadgets are starting to introduce a wide variety of augmented reality (AR) hardware and apps. AR gives the user the ability to scan the visual landscape or use an AR image which then displays data, graphics, and other information on their screen; this could become a regular part of our outside activities when integrated into items like Google maps or when searching for food nearby – and with it could be your advertising.

·  Floor graphics – We’re generally bombarded with advertising either at eye level or when we’re looking up so it’s kind of unexpected to see an advertisement on the floor especially in areas such as stairs, before stepping onto public transit, entering a store, or attending an event. Floor graphics can be a viable option when paired with a creative mind.

·  QR Vending – Tesco turned a few heads when they introduced the ability to shop for items using what could be called a QR code “vending” machine; it allowed people to scan codes, complete the purchase, and have items ready/delivered by the time they reached the store or home. Advertising could utilize some of these features by pairing the it with directed sales – you could cause a point-of-sale as someone is viewing your advertising – it makes it interactive.

Every space gives you a chance to explore various advertising and marketing options whether it’s a large, paid campaign to wrap an entire building or low-key guerilla marketing tactics such as using street art or performers. No doubt, the items listed, above, will turn heads and pull them into your branded message.