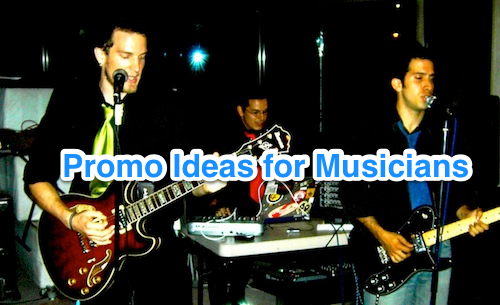 The other day I received an email from a “fellow” musician that wanted to pick my brain about promo ideas for his band. I say “fellow” because I was theoretically a musician back when I used to live in Mexico. After taking some digital mixing courses at a contemporary art museum, I ventured into creating my own mixes, which are still around at my Myspace page. While I was definitely not the most creative musician (BTW I’m the one in the middl in the picture above), I did have a knack for promoting my band as many as ways as possible.

Through my network of people involved in activities for the contemporary art museum, I approached as many artists or aspiring artists as I could to pitch the idea of creating various posters for the same event. An awesome graphic designer created most of our posters and she loved the idea of having total creative liberty to develop her own ideas. We would surprise people with fresh ideas and people actually started expecting to see the whole set of flyers for every gig. Here are some of the flyers that we had: 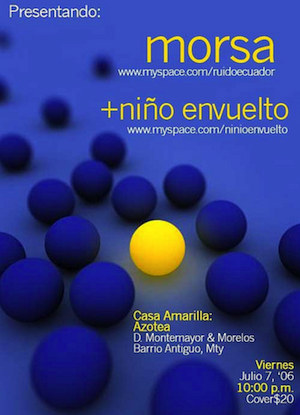 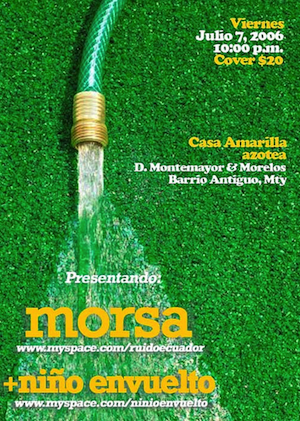 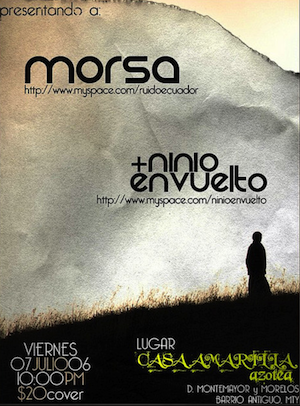 Notice how the three flyers are for the same date July 7, 2006. We were able to get away with filling up more walls because people often would think that they were for separate events, when in reality the three were for the same one!

We also ventured into designing pins to sell and give away during our concerts. While some people were into them and some were not, I was always wondering about a good souvenir that people would be interested in getting from us or even buying.

The idea couldn’t have been more obvious! As you saw from the pic at the beginning two-thirds of our band was made of guitar players. So that is why I really wished that we had invested in creating some personalized plectrums, also known as guitar picks. For example, take a look at http://www.likemyphotogifts.co.uk/page/personalised-plectrums. As you can see there, you can easily customize the plectrum with your own text and images. We could have easily have them hanging from the guitar body or mic stand, so they would appear on most pictures and people would actually become interested in having them. Plectrums are often given away at shows and having a very cool one would help your listeners remember the show even better. Also, you could include the URL from your band’s website so that people know where to listen to more tunes and keep up with news and updates.

This is by far the most overlook promo channel by musicians. They often connect with radio DJs, magazine editors, and fans but somehow fail to connect with indie bloggers that cover the local music scene. Never, ever, underestimate the power of those indie bloggers because they really take their craft seriously and they will often help you…if you just give them your undivided attention for a little while. We really made a habit of inviting local bloggers, often letting them for free, as long they would promote our gigs 1-3 weeks in advance. For us the cost of a single ticket was very worth being included in the calendar of activities of a blog. It really helped spread the word because each blogger could reach at least 100 hundred people, from our personal experience.

Also, having those cool flyers made it an easier decision for them to write about us, because at the very least they would always ask us about the story behind the flyers. Having a cool story always helps to grab their attention.

Promoting your band is hard work. Try to incorporate these three ideas to spread the word about your gigs: create several variations of flyers for the same event, design personalized plectrums to both give away to attendees and sell as souvenirs, and spend some quality time with local music bloggers.