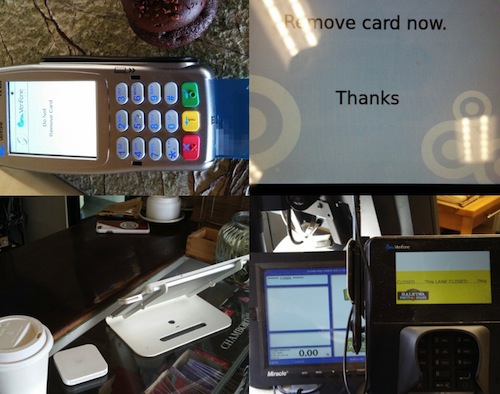 In partnership with Gemalto, I spent a week visiting business across the island of Oahu using only a chip debit or credit card for payment. Three other personal finance bloggers joined me in investigating the state of EMV support in their communities.

My “EMV for a Week Challenge” included ten tasks, ranging from buying a magazine at a gas station to hitting a tourist attraction around town. After visiting several neighborhoods and talking with members of the local business community, here is my report on what you can expect when using a chip in Hawaii.

1. Get Coffee at a Local (Not Chain) Coffee Shop

I was able to get a coffee at The Curb‘s location in the Kaimuki neighborhood by dipping my chip credit card in a Square contactless + chip card reader (pictured below).

The clerk at The Curb indicated that, unlike the regular card reader from Square, the chip card reader isn’t free for retailers. According to Square’s website, The Curb’s chip card reader model costs $49 and can also process NFC payments, such as Apple Pay.

In Honolulu, there are at least two locally-owned businesses that you can get a cup of Joe using your chip card.

2. Make a Purchase at a Big-Box store

Given that Target had to pay $19 million over its 2013 credit card breach, I was very interested in checking out the Target location in Salt Lake.

My EMV experience at Target was very seamless and my dip-and-sign didn’t take long. Walmart, Lowe’s, and The Home Depot are other big-box retailers in Hawaii ready to accept chip cards with both dip-and-sign and dip-and-PIN.

3. Get a Meal Inside a Fast Food Restaurant

I wasn’t able to find any fast food restaurant that would accept chip cards. All Jack in the Box and Jollibee locations that I visited had terminals that only had a magnetic stripe reader. While many of McDonald’s locations, such as the one on Keahole Street, already have payment terminals with chip card readers, the slots on those readers are blocked.

The folks behind the McDonald’s of Hawaii Twitter haven’t responded to my question yet.

4. Buy a Magazine at a Gas Station

If you’re planning to make a purchase inside the convenience stores at gas station using your chip card in Hawaii, you’ll be out of luck!

Aloha Gas, 76, Chrevon, and 7-11 (35 locations are at a gas station) weren’t processing EMV payments during the “EMV for a Week Challenge” in Hawaii.

I choose Longs Drugs (owned by CVS but still carrying the name that carries a lot of goodwill for Hawaii residents) for making my groceries run.

The early bird gets the worm! Did $50 worth of groceries with “dip-n-PIN” at Longs Drugs! #chipawayatfraud pic.twitter.com/fseeG9Fku4

My payment using dip-and-PIN at the Longs Drugs in Hawaii Kai took slightly longer than a debit card with PIN purchase but definitely worth the extra five seconds for the added security. With 28 locations just on Oahu (locations also on Maui, Kauai, and Big Island), Longs Drugs is a must-visit destination for holders of “chipped” debit and credit cards buying groceries.

Other options that accept chip card payments are Walgreens, Walmart, and Target. Neither Times Supermarkets nor Foodland locations were accepting EMV payments during the challenge. Another surprise was that Whole Foods wasn’t reading chip cards through their chip card readers.

I headed to the North Shore in search of my tacky t-shirt because I hoped that the stores in the recently renovated Haleiwa Stores Lots would accept EMV payments.

At first I was excited because the payment terminals at many stores, such as Malibu Shirts and Splash Hawaii, had the chip card. Once I had chosen my Hawaii Five-O t-shirt at Malibu Shirts, I discovered that the store wasn’t actually able to read chip cards.

On @Gemalto_NA‘s #EMV Challenge I got my tacky t-shirt. No chip card readers on Oahu’s North Shore! #chipawayatfraud pic.twitter.com/XWbQtmPnuD

The same situation happened at all other stores in Haleiwa. A sales person at the Spam Hawaii t-shirt stand about a block away from Malibu Shirts told me that they could only swipe cards. On a separate note, I was hoping that I could add the Haleiwa Fruit Stand to my list of places to make groceries but their chip card readers weren’t able to process chip cards during my visit.

7. Get Someone Special a Bouquet of Flowers

Given that is Hawaii after all, I went for a lei instead of a bouquet of flowers. I didn’t have a chance to visit the lei shops around Chinatown and the lei stands by the airport to check for EMV readers but I plan to do that soon. To be able to add one more point to my list of successful chip card transactions, I visited the Longs Drugs at the Ala Moana Shopping Center.

8. Hit a Tourist Attraction Around Town

Despite making several calls, I wasn’t able to find one tourist attraction that would be willing to take my chip card! I limited my research to well-known landmarks, such as Hanauma Bay State Park, so there is a chance I could had a better chance with some less popular attractions. Regardless, it was still an awesome day at the Honolulu Zoo with my family!

I combined my lei and office supplies purchase at the Ala Moana Longs Drugs.

Hooray, completed my 10 tasks for @Gemalto_NA‘s EMV for a Week Challenge with visit to Longs Drugs! #chipawayatfraud pic.twitter.com/jWqtcXW48t

However, folks at the Reddit Hawaii group pointed out that I could have also visited Office Max or Office Depot. Fisher Hawaii wasn’t processing chip cards during the challenge.

10. Mail the Folks at Gemalto a Postcard from a Local Post Office

Since President Obama had set October 2015 as the deadline for all payment terminals at federal agencies to be able to accept embedded chip cards, I hoped that the USPS would take my chip card. (Note: yes, I know that USPS is an independent agency, but it surely is one of the most used agencies by customers!)

During my research, I found other businesses that took chip cards:

Despite completing only 50% of my tasks for the “EMV for a Week Challenge”, my experience using a chip card in Hawaii was positive. While there is still room for improvement, I believe that many business owners are trying their very best to adopt the new technology (at least in the United States!).

In the meantime, one useful resource is http://emvacceptedhere.com.

Know a business in Hawaii that is ready for chip cards? Tweet me at @idaconcpts or email me at damian [at] idaconcpts [dot] com.