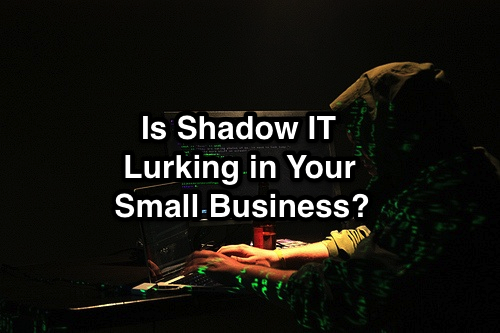 Do you identify as being someone who doesn’t put their full trust in the company IT department? Maybe you don’t appreciate their snark when you’ve asked them for help with troubleshooting. Maybe they procrastinate on media projects and your company’s brand is suffering as a result. Whatever the reason, you’ve entertained the idea of downloading Shadow IT and uploading it on your company’s network. You’ve read that Shadow IT or Stealth IT gives users the control they’re looking for without ever having to rely on the IT department again, but is it good for business?

Downloading on the DL

Shadow IT is used to describe an information-technology systems solution created and used inside a company network without company approval. Employees use Shadow IT to download their own software and other systems without having to go through the IT department, giving them what they think is complete control of their desktop. According to InformationWeek, Shadow IT was originally developed out of necessity by skilled tech employees who were trying to come up with their own tech solutions to “specific line-of-business problems.”

With companies incorporating the Bring Your Own Device policy (BYOD) into the fray, more and more employees are now downloading and using systems they’re already familiar with on the company’s private network. While Shadow IT may make work easier (think about the software challenges faced by Mac and PC users) and takes some of the pressure off the in-house IT team, it does present some negative side effects.

These same employees who are bringing their smart devices into work are also downloading and using unregulated apps at home. Applications you may have denied your employees to download at work could instead be downloaded at home. This means that when they plug into the company network, there is significant risk of the network getting compromised.

The downloads they installed using an unprotected Wi-Fi connection at their favorite coffee shop or by clicking on a phishing link promising a free download of Microsoft 365 will infect the company’s private network once they connect their devices at work. As your IT team won’t know what has been downloaded to employee private devices, from which site it was downloaded or on what network, they’ll have a hard time fixing the issues, leaving your company data vulnerable to cybercriminals.

No One is Safe

Considering only 25 percent of companies monitor their cloud storage and remove all unauthorized applications, it’s safe to say that a majority of businesses have put themselves at risk of infecting their network with malware. Like any savvy business owner, you want to stop a data breach before it even happens, but Shadow IT makes that goal less and less attainable, and it will only be a matter of time before a cybercriminal attacks and successfully infiltrates your company network.

Should your network be compromised and your data stolen or destroyed by a hacker, there is data breach insurance coverage that will financially cover the damages, including paying for litigation fees should any of your clients decide to sue your company for negligence.

More and more companies are instituting BYOD policies, but data breaches are also steadily on the rise—think this is a coincidence? By allowing your employees to work from their own devices, you are putting your company at risk of data leaks, data loss and a data breach. By not keeping the IT department abreast of recent downloads and software installations, you are endangering your network, your customers and your business.

Don’t throw away everything you’ve built because an employee downloaded an infected torrent video. Set up rules, regularly monitor your cloud and implement a company-device only policy.