Wow. Did you just read that headline, right?

With a rumored market valuation of about $25 billion and a possible IPO, how would it be possible that Groupon’s revenue is falling at home?

Groupon’s February 2011 is a Tipping Point 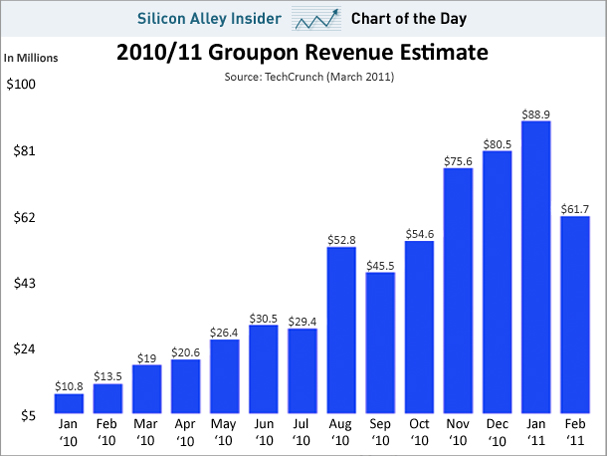 Given that Groupon is currently a private company, it is not in any obligation of revealing its official numbers. However, given that the rumor mill was already in full gear, it is not a surprise that CEO Andrew Mason posted this at the Groupon Blog.

So, it is plausible that the U.S. market is so saturated with daily deal startups that Groupon will have to deal with a smaller slice of the pie.

Launch of GaoPeng.com in China 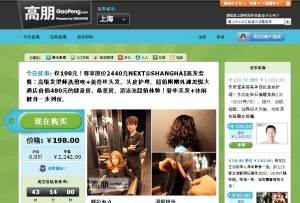 If the potential for growth in the U.S. is truly dwindling for Groupon, then it would make sense that the company needs to look at international markets.

The 2/27/2011 launch of GaoPeng.com by Groupon in China would support such a statement.

Yahoo alum, Rob Solomn, suddenly left the company around middle March 2011. Rob was the  COO and employee number 200 of Groupon. He was considered the “serious” one (think of Eric Schmidt at Google) in the Groupon’s management team.

While there are no specifics on why left, All Things Digital claims it obtained the official email from CEO Andrew Mason to all staff regarding Rob’s departure:

Rob Solomon joined Groupon just over a year ago, doing what he once considered unimaginable and relocating his family from “God’s Country” in Woodside, CA to Chicago, bringing his experience as a seasoned Internet executive to help us turn Groupon into the next great technology company.

Now, Rob is moving on, taking his family back to God’s Country. During Rob’s tenure, Groupon has grown from 1 country to 44, 200 employees to 6,500, and 3 million subscribers to over 70 million–in no small part due to his contribution. I’ve learned an enormous amount from Rob; Groupon wouldn’t be the same without him.

In the coming months as we find and transition to a new COO, Rob will remain in his position…and he will remain a friend and advisor to the company into perpetuity.

Thanks for everything Rob!

Did the job became too big for Rob? Did he see something wrong? We can only infer, but key management doesn’t just leave out of the blue for a small reason.