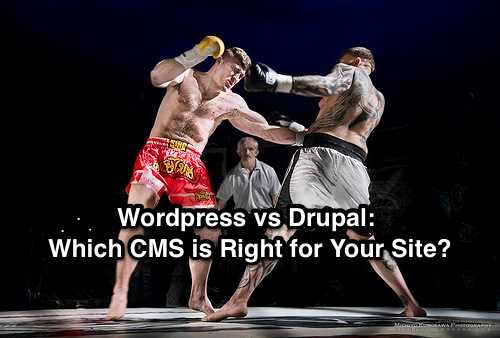 Most websites these days have massive amounts of content that must be managed for the smooth functioning of the site. The role of this falls to content management systems, or CMSes. There are several free CMSes out there that are used all over the web. Two of the most popular packages are WordPress and Drupal. According to Drupal’s own statistics, over a million websites run this CMS package. Even more interesting, Drupal is preferred by sites that have high traffic numbers. However, 60 million sites run WordPress making it by far the most popular free CMS package.

In this article, we will explore what are the advantages and disadvantages between Drupal and WordPress, and which CMS should you choose for your business or personal website.

First, a little bit about both CMSes:

WordPress was primarily developed as a blogging platform and was the first CMS to catch a major amount of popularity. It is the Windows of the CMS world. It was first released back in 2003. Big-name websites like CNN.com and the New York Times run with a WordPress backend. Its main claims to fame are ease-of-use and a quick installation procedure. If your domain is live you can be up and running within five minutes. Slap on a free theme to make it look pretty and you’re ready to go. Sort of. Read on to find out why.

Drupal, released in 2001, is like the Linux of CMSes. It was designed for developers in mind that aren’t afraid to get in and dig around in code, and many of the same design philosophies in Linux are present within Drupal. Drupal can handle many different types of website designs that WordPress has trouble with like static websites. In fact, it is often touted as a one-size-fits-all CMS. Its main claims to fame are security and flexibility. Many government sites, including whitehouse.gov, run on Drupal because of its security features, but it’s not as popular because it is perceived as a difficult system to learn.

So where do these two systems stack up in comparison? That depends on what you want your content management system to do for you. Here are some basic considerations you may want to examine before choosing one or the other.

This is the big reason why there are so many more WordPress users than any other CMS. It is quick to install, there are thousands of free themes and plugins, and administration is a breeze. If you know HTML, CSS, and PHP you can easily create your own themes and plugins once you understand how WordPress works. Plus, it has a very large and helpful developer community. However, if your idea for a website stretches beyond blogs then the difficulty of using WordPress increases substantially. Any commerce-based site will need to put in additional plugins to add that functionality.

Drupal, on the other hand, is known for its great flexibity, but with great flexibility comes great learning curves. While it’s just as easy to install, getting from installation to functional website is difficult at first. Plugins, or modules in Drupal-speak, are available but not as many. Drupal has a built-in expectation that you already know how to design a website. While themes are available they are not nearly as many. Drupal also has a very large learning curve. But if you can get past that curve, you can build whatever you like.

The Drupal community can really feel like the 90s-era Linux community where everyone expected you to Read The “Friendly” Manual before asking a question. Here are a couple of Drupal forum posts expressing beginner frustration, and the sometimes less-than-helpful answers in response:

Both packages offer good SEO practices, but Drupal was designed for SEO from the ground up. However, WordPress has several plugins that make it equivalent to Drupal’s SEO prowess.

If you’re using a high-volume content strategy for your SEO, then Drupal wins. Drupal is far superior for handling large (think tens of thousands) of individual pages and serving that content to thousands of people at the same time. WordPress just isn’t designed for high page counts or visitors. If you’re running an e-commerce site you could easily hit that number if you have a large catalog.

An excellent summary of Drupal’s built-in SEO features can be found at http://www.commonplaces.com/blog/is-drupal-seo-friendly/. Similar functionality can be done in WordPress with the use of plugins like Yoast, but it’s nice to have it all ready for you at the start.

There are two types of flexibility. The first type offers many choices and allows you to choose among them. The second type lets you develop your own solution so you can get exactly what you want. WordPress falls into the first category and Drupal falls into the second.

WordPress has so many themes and plugins that it’s quite easy to get analysis paralysis or spend hours trying out themes and plugins until you get just the combination you like. But you’re stuck with the options available, and even if you know the necessary programming languages you may still not be able to do exactly what you want to do due to how WordPress is designed.

Drupal gets out of your way and lets you build what you want, but you’ll have to tackle its learning curve. If you can master it, you can build just about any site that you can imagine. There are also quite a lot of free themes for Drupal if you just want to throw up a quick site. Drupal also lets you set up your own content types so you don’t have to be stuck in the pages/posts paradigm that WordPress presents you with. WordPress’ assumption that you’re going to be build a blog site can get in the way of your design goals.

If you’ve worked a lot in WordPress you can tell when a site is built on it even if they’ve done a lot of modification. But with Drupal, you can make something really unique. And so, we have to rule in favor of Drupal.

Winner: Drupal if you can code. WordPress if you want to reuse someone else’s code.

WordPress does not allow you to do e-commerce out of the box, but there are several plugins that can help, notably WooCommerce. The plugins often come with major limitations though. Yes, if you’re running a small site selling a handful of items then they can work well. But if you’re running a site with a lot of inventory, a lot of users, or if it needs a robust shopping cart system, then you’ll need something stronger and you likely have the funds to pay for a developer to write a proper shopping cart system for Drupal.

Drupal is the stand-out winner here. WordPress’ plugins come at a cost. Each one opens up a potential security hole on your server. There are companies that specialize in hosting WordPress sites that will handle updates and security holes for you just because this is such a large problem. An unprotected WordPress site will be buried in comment spam if left for long enough, or even outright taken over if your password is weak. This is why WordPress may not be ready to go out of the box. To WordPress’ credit, it automatically installs some of the most important security plugins immediately but they require activation.

In contrast, Drupal offers robust security features built into the code, including strong version controls, access control lists, and security reports. These features make Drupal much more suited for enterprise-level websites. Also, if you’re handling financial or personal information for any length of time, you’ll be glad you had Drupal’s security features.

Both CMS systems are free, but if you’re paying someone to develop your vision then Drupal is going to be more expensive. The reason for this is that Drupal is more complex and there are fewer developers. However, that extra cost may be well worth it to achieve your website goals. And there’s always the option of learning how to code yourself so you can build your own site, though this may not be viable for a business.

You might be able to find a Drupal developer faster than a WordPress developer though, simply because there are fewer job posting for them. If you do a search on a technical job board like Indeed or Dice, you’ll see that there are a lot more jobs for WordPress developers than Drupal developers. You’re also much more likely to get a developer who knows what they are doing with Drupal, as WordPress’ ease of use can make it easy for anyone to pass themselves off as a developer, at least for a little while. If you plan on hiring a developer, have a clear concept of your site in mind before hiring.

For the vast majority of users, WordPress is going to be an adequate CMS. It is easy to use, simple to install, and highly configurable. Even its weaknesses can be improved using the right plugins. Hardening it against most comment spam is easy by using the Akismet plugin. SEO can be improved using Yoast. There’s nothing really bad about using WordPress until your design or the size of the site go beyond its limitations.

But if you need a website outside of the blogging paradigm, or if you need to have complete control over what goes into your site, then Drupal is the CMS for you. It is far more flexible and configurable than WordPress. Its scaling abilities make it perfect for high-content sites that WordPress cannot handle. The security is top-notch compared to WordPress.