On April 21, 2011 there are several websites down. Among the affected are  HootSuite, Reddit, Foursquare and Quora. The problems appear to be caused by an issue affecting the Amazon Web Services. The company claims that are working to resolve the problem. Amazon Elastic Compute Cloud, Amazon Relational Database Service and Amazon Elastic Beanstalk also appear to be experiencing problems. The issues were all visible on 4/21/2011 at Amazon’s AWS Service Health Dashboard. 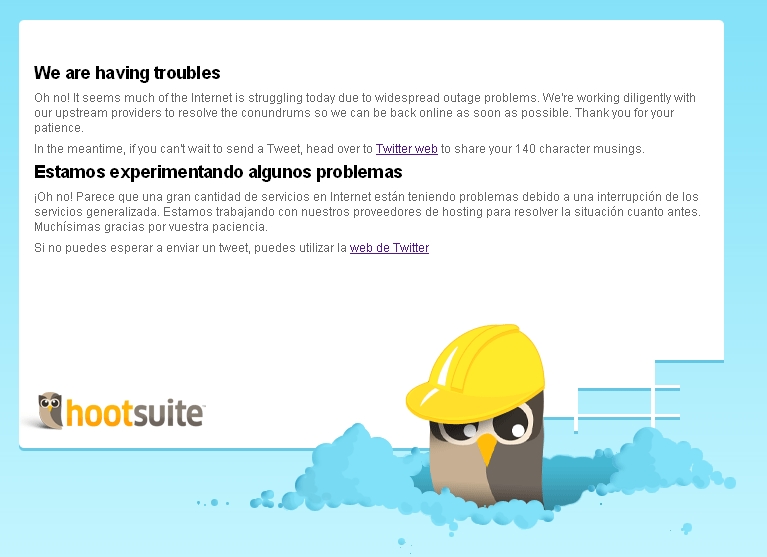 From the image above, you can see that HootSuite is “struggling today due to widespread outage problems” and ” working diligently with our upstream providers to resolve the conundrums so we can be back online as soon as possible”.

Then, Hootsuite goes on to present the same message in Spanish.

Extra points on use of accent marks, use of vuestra,  and signos de exclamación.

Why HootSuite is Doing This?

Hispanics made up 12.3% of the total US Internet population in 2009, and that number will increase to 13.9% in 2013. The U.S. Hispanic presence in the Internet is not only going to increase in quantity but also in quality as Hispanic U.S. Internet users are poised to have the highest purchasing power.

Savvy Internet startups should keep these 2 facts in mind.