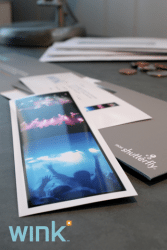 Screen Shots of Wink for the iPhone

Both the iPhone and web interfaces of the app are really intuitive, offering templates for printed photostrips™ with 3, 4 or 5 photos. Here are some screen shots of the iPhone app from AppShopper:

Finally, here is a screen shot from Wink’s web interface:

1. Wink offers a tangible, immediate, AFFORDABLE reward that is great for techies and non-techies alike.

This is not a secret: people want something in return for their work. Wink offers a printed photostrip™ using pictures from your phone, camera, and social networks like Facebook and Flickr. It takes you about 2 minutes to create one from scratch, and BAM! you get to see it right away. Eventually the work becomes play.

While photobooks go for $20 and up (not including shipping), I can mail anybody, anywhere in the world a nice printed photostrip™, now how cool is that?

Finally, forget complicated slideshows with fancy blows and whistles, a printed photostrip can be enjoyed as well by a 3-year old as by a 80-year old.

One sees this way too often: a startup has a great idea, spends a great deal of time and money to develop it, launches it…. and a giant crushes the startup by cloning its unprotected, un-patented idea.

Why do you think I’ve been including the trademark sign all along? This simple detail saves Wink a whole bunch of trouble.

Wink’s customer service rocks!
–
It really does.
–
Remember that I mentioned that I saw an ad for the Wink iPhone app on Words for Friends on December 2009?
–
I downloaded the app because it had an offer for 3 free photostrips.
–
After making my order over the holidays, I got a bit impatient about the status of my order because the iPhone app does not offer an order status update.  So I contacted their customer service at customerservice@cs.shutterfly.com and they responded my e-mail right away. What was so great about this customer service?
1. I am a non-paying customer: I didn’t pay for the iPhone app and I didn’t pay for the photo strips (remember I got 3 freebies!)
–

2. The customer service e-mail is not a do-not-reply e-mail, which means customer service ACTUALLY wants to hear from you.
–
I e-mailed Skyler at Wink’s customer service a total of 4 times and he was super cool, heplful, and friendly. By the way, he runs Wink’s Twitter account.
–
(Note: the web interface does offer a status update but I found that out a couple days later)

Shutterfly’s Wink is a great app that truly brings your photos back into your life by a tangible, immediate, affordable reward that is trademarked and backed up top notch customer service. Try it for yourself at http://wink.shutterfly.com.

2 thoughts on “Shutterfly’s Wink Brings Your Photos to Life”