As social media networks have been assimilated by younger generations, it was only a matter of time until the older generations would catch up.

From the table above, it can be clearly seen that there is little room for growth for social media in the Millenial and Generation X age groups. However, there is a lot of room for penetration in the Baby Boomer and Mature demographics.

What causes the adoption of social media networks by older generations? Here are 2 potential causes.

Here are 2baby boomer profiles to illustrate the health and mobility issues that this generation faces:

Judith and Dennis are just a small sample of the mix of health and mobility that invade the lives of older Americans. Social media allows to overcome these barriers and empowers them to connect with family and friends.

2. Baby Boomers want to have fun.

Yes, you read that right. This ties in with the previous factor: health and mobility barriers prevent baby boomers from having fun. The rise of the social games industry has been partly fueled by their increased used of the Internet and social networks.

However, games such as Mafia Wars and World of Warcraft might not be what Judith and Dennis are looking for. These games focus on competition and rivalry, which is added stress to their already complicated lives. Jane McGOnical, author of Reality is Broken: Why Games Make Us Better and How They Can Change the World, highlights that “studies show that people prefer cooperative games versus competitive games 3:1. Not only do 75% of all gamers prefer social and cooperative games, playing these actually improves their real-world sociability. Games bring out the best in us, and can cure depression.”

This would make sense why social gaming sites that highlight collaboration and social interaction such as Winster.com are gaining a strong following of baby boomers.

With over 2.1 million unique visitors in February 2011 (according to data from Compete), Winster.com has an appealing proposal to baby boomers: it offers the opportunity to play casual games as a social outlet, which encourages positive interaction with each other, enabling trust and friendships to develop. 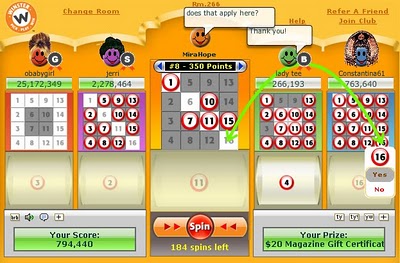 As you can see from the screen shot above, the layout of this bingo game from Winster.com is simple yet very user friendly. Unlike social games from Zynga such as FarmVille, these games are multiplayer, synchronous, and collaborative games played in real time.

The Baby Boomer generation will further adopt social media to satisfy their social needs and to overcome their health and mobility barriers. Also, boomers have taken an interest in social gaming platforms that allows them to interact with peers, make friends, and have fun.