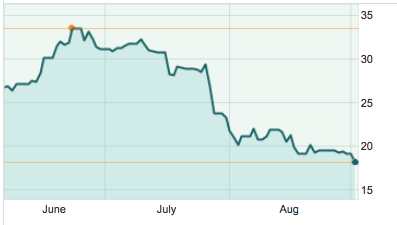 Back in 2007, Tiger Woods was still the undisputed king of golf. MySpace ruled the social media roost, fending off a feisty underdog called Facebook that threatened to steal a share of its influence.

Things change quickly. Within half a decade, most social networkers have fully abandoned MySpace. And although Facebook looked like the impenetrable Tiger Woods of social media just a year ago, the chinks in its armor are beginning to show.

So is Facebook in any real trouble of becoming irrelevant? Probably not. But the problems they’re facing are numerous:

Just before Facebook’s IPO in May, General Motors pulled out of their $10 million contract with the company, generating a very public black eye. Although it didn’t initially affect share trading, it caused other advertisers to question the effectiveness of their marketing with Facebook, especially as Google’s click-through rate outperformed Facebook’s sidebar ad rate, dropping to 0.083 percent by late July.

Ever since peaking on opening day at over $38 a share, Facebook’s stock price seems to be reaching new record lows on a weekly basis. By the start of September, it had bottomed out at $18, without showing signs of picking back up. Facebook holds unbelievable information gathering power over its users, but it hasn’t yet figured out a way to capitalize and not cause a mass exodus.

Facebook’s initial power lied in its open platform. Anybody could (and still can) share virtually anything they want, connecting with and reaching more ‘friends’ than has ever been possible by any other platform in history. Businesses obviously want to take advantage of that. Recognizing that its sidebar ad value was severely compromised, Facebook responded this summer by allowing business pages to promote their posts, paying to make status updates ‘stickier’ on followers’ news feeds.

Last spring, Facebook launched a paid-post beta program in New Zealand, allowing users to highlight their updates for a nominal fee. It’s just a dollar or two per post, but if news feeds become overwhelmed with advertising and paid posts, will users be forced to pay just to get their message out to enough friends to make posting it feel worthwhile?

That’s the big question that Facebook, Twitter and every other social network faces. By monetizing the user experience, the allure that drove people to the site in the first place can easily be compromised. Start-ups like Path and Duoboard.com have since entered the scene, offering a place where users can enjoy a less-overwhelming sharing experience with real friends, free of the over-saturation of marketing starting to penetrate Facebook.

Of course, those new social media platforms could come and go as well. Each will need to find a way to make money to survive, or sell out to another company who will assume the problem for them.

With all of the uncertainty about the durability of any one particular social media outlet, what’s the answer for a business owner looking to effectively market themselves on the web?

Here’s the bottom line: Just because you control your Facebook page and Twitter feed, treat them (and every social media outlet) as a public space. Would you send your marketing team online into neutral forums and ask them to blatantly interrupt conversations by pitching your products and services? Of course not.

If your social media pages are little more than a replication of your website and a place to pitch your company, nobody will want to visit. You may get a few ‘Likes,’ but you won’t get repeat traffic.

The key to adopting a social media outlook that will last well beyond the lifetime of Facebook or any other current outlet is in the realization that marketing itself has fundamentally changed. Utilize each of your accounts as you would a team of company representatives at a networking party. Start interesting conversations. Offer genuinely useful information, even if it doesn’t directly pitch something you’re selling. Be endearing and establish a reputation as an expert.

By following those rules, you’ll automatically be listening as much as you’re talking. Social media is all about responding. By participating in the back and forth conversations with your clients and customers, you’re guaranteed to never fall behind.

When the trendsetters start to move on to the five-years-down-the-road next big thing (and who knows if it’s a company that even exists today), you will already be right there with them.

About the author: Christopher Wallace is Vice President of Sales and Marketing for Amsterdam Printing, a leading provider of personalized pens and other promotional products such as imprinted apparel, mugs and customized calendars. He regularly contributes to Promo & Marketing Wall blog.